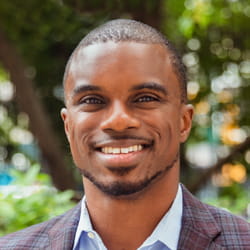 Professor Codrington is a constitutional law scholar with a focus on constitutional reform, election law, and voting rights. He was previously the Bernard and Anne Spitzer Fellow and Counsel at the Brennan Center for Justice at NYU School of Law where he focused on voting and election security, constitutional reform, and the rule of law. He also taught graduate and undergraduate courses at NYU Wagner School of Public Service on topics of law, public policy, and politics. Professor Codrington was also a Fieldwork Supervisor for the Brennan Center Advocacy Clinic, an NYU Law School clinic devoted to teaching public policy through real world legal reform campaigns that impact the laws of democracy and the regulation of election contests.

He is the co-author of The People’s Constitution: 200 Years, 27 Amendments, and the Promise of a More Perfect Union (The New Press 2021), which examines the history of constitutional amendments and the tension between the overall progressive arc of constitutional change and the conservative grip on the broader conversation about the Constitution. Among his recent articles are “So Goes the Nation: What the American West is Telling us about How We’ll Choose the President in 2020,” 120 Columbia Law Review 43 (Forum) (March 2020); and “The Benefits of Equity in the Constitutional Quest for Equality,” 43 N.Y.U. Review of Law & Social Change 105 (The Harbinger) (2019).

Previously, Professor Codrington was an associate at DLA Piper in the litigation, government investigations, and regulatory practices where he participated in a variety of pro bono projects on behalf of individual clients, minority communities, and nonprofit organizations. He also clerked for Hon. Deborah Anne Batts, U.S. District Judge for the Southern District of New York, and served as a staffer for U.S. Congresswoman Eleanor Holmes Norton.