The Alternative Dispute Resolution Honor Society (“ADRHS”) is Brooklyn Law School’s distinguished accredited honors organization that prepares students for success in the newest trend in the legal profession. Students participate in alternative dispute resolution competitions across the country in various areas of the law, such as the intellectual property negotiation, international mediation, baseball arbitration, and the securities law triathlon.

ADRHS is committed to fostering an inclusive environment and equipping its members with practical skills in the field of ADR that will prepare them for the practice of law. This commitment includes deliberately creating and maintaining conditions that enable all members to be valued as they are. ADRHS creates points of entry for new members to participate while remaining fair and impartial. We are continually and collectively invested in the growth and development of our members and the Brooklyn Law School community.

Students hone their legal skills in preparation for competitions in four areas of alternative dispute resolution: negotiation, mediation, arbitration, and client counseling. Preparation for competitions through written briefs and contracts, and simulations allows students to gain experience in a unique skill set that allows them to become a better advocate for their client and a more creative problem solver.

These particular legal skills are essential to becoming a successful attorney and universally applicable to all practices of the law. Students may earn academic credit for participating in competitions and for coaching other competitors. 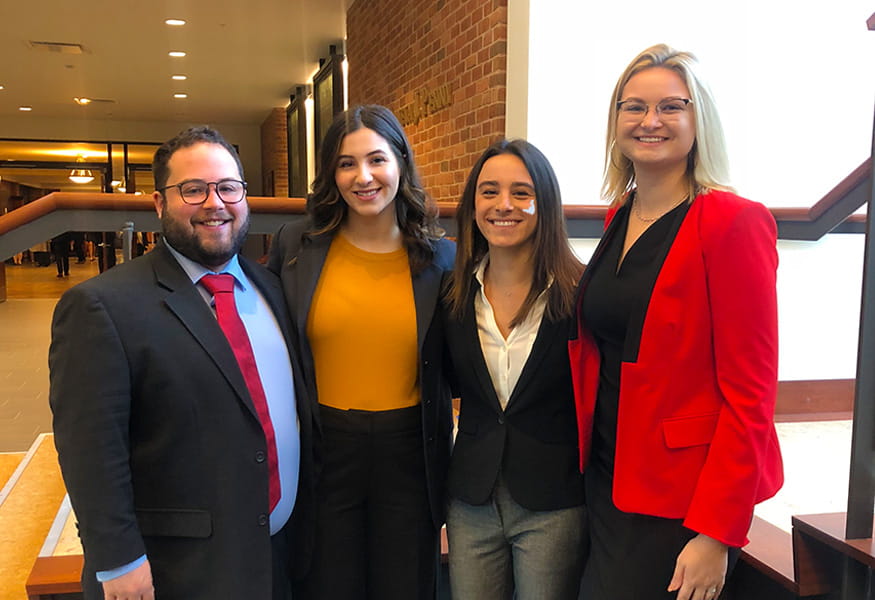 The Alternative Dispute Resolution Honor Society Tryouts take place in the spring semester during February or March. This highly competitive mock negotiation will determine who will be invited to join the society for the following competition year.

The tryout competition is comprised of two separate rounds of multi-party negotiations that will be judged by current ADRHS members. Participants will be sent a general fact pattern and respective private facts depending on the party that they will be assigned to represent. Participants will be told certain concessions their clients have authorized and certain demands they need to meet on behalf of their client. Performance will be scored on a rubric that considers factors such as professionalism and ethics, comprehension of client’s goals, and ability to work alongside other negotiating parties. Participants will be e-mailed the rubric prior to their tryout.

The number of students admitted to join ADRHS vary based on the society’s competition needs for the following year. Typically, ADRHS offers memberships to those who score in the top 15% of all participants.

Transfer students may be eligible for membership in ADRHS in the competition year for which they matriculate at Brooklyn Law School. Transfer students who are interested in becoming members may inquire to ADRHS at adrhs@brooklaw.edu.