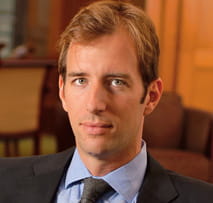 Professor Tebbe teaches courses on constitutional law, religious freedom, legal theory, and professional responsibility. His scholarship focuses on the relationship between religious traditions and constitutional law, both in the United States and abroad. His articles have appeared in Georgetown Law Journal, Journal of Religion, Michigan Law Review, University of Pennsylvania Law Review, and, most recently, Virginia Law Review. He is a past Chair of the Law and Religion Section of the Association of American Law Schools and he is co-organizer of the Annual Law and Religion Roundtable. He is regularly called on by media outlets to discuss questions of religious freedom and general constitutional law.   Professor Tebbe served as a Visiting Professor of Law at Cornell Law School during the fall of 2012. He joined Brooklyn Law School from St. John's University School of Law, where he received a Dean's Teaching Award. Before teaching, he clerked for Judge John M. Walker Jr. of the U.S. Court of Appeals for the Second Circuit and practiced law at the American Civil Liberties Union and at Davis Polk & Wardwell. He was also a Fulbright Scholar at the University of Cape Town.   Experience Professor Tebbe's Classroom