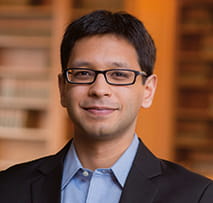 Rahman’s research focuses on the themes of democracy, economic inequality, exclusion, and power. His first book, Democracy Against Domination (Oxford University Press, 2017) examines how democratic ideals fueled reform movements in the Progressive Era, and what their implications might be in today’s post-financial crisis debates about economic inequality. His second book, Civic Power (Cambridge University Press, 2019, with Hollie Russon Gilman) explores new approaches to organizing, power, and institutional reform in the face of the current crisis of American democracy. His next research project focuses on the problems of structural inequality and exclusion, private power, and inequality, exploring historical, social movement, and public policy approaches to tackling these issues. In addition to his academic writings in law, political theory, and political science, he has written for a variety of venues including The Atlantic, The New Republic, Boston Review, Dissent, The Nation, and others.

Rahman has worked extensively with policymakers, funders, and advocacy groups in developing strategies and novel approaches to questions of democracy and economic inequality. In 2014-15 he served as a Special Advisor on strategies for inclusive economic development in New York City, and from 2015-16 as a Public Member of the New York City Rent Guidelines Board. From 2013-2016, Rahman was the Design Director for the Gettysburg Project, an interdisciplinary initiative working with organizers, academics, and funders to develop new strategies for civic engagement and building civic capacity. In addition, Rahman is on the Board of The New Press, a non-profit publisher focusing on publishing books in the public interest, and United to Protect Democracy, a legal advocacy group battling current threats to American democratic institutions.