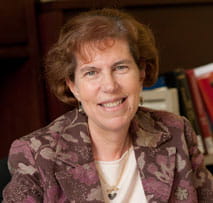 Janet Sinder joined the faculty in 2012 as the Director of the Brooklyn Law School Library. Her professional interests include the intersection of library services and information technology, copyright, journal open-access issues, as well as legal history. An active member of the American Association of Law Libraries, she served as the editor of Law Library Journal, the association’s official journal, from 2007 to 2013, and continues to serve on the journal’s Board of Editors.

During her time at the Law School, Professor Sinder has focused on transitioning the library’s collection away from print materials to electronic resources, including the addition of a significant number of e-books.  She has also been involved in promoting the dissemination of faculty scholarship and the law school journals through our open-access digital repository, BrooklynWorks.

Professor Sinder was awarded the 2014 Frederick Charles Hicks Award for Outstanding Contributions to Academic Law Librarianship by the American Association of Law Libraries.  Her article, The Effects of Demand-Driven Acquisitions on Law Library Collection Development, was named the 2017 Law Library Journal Article of the Year.

Prior to coming to Brooklyn Law School, Professor Sinder worked at the law libraries of Duke University and the University of Maryland. She began her legal career as an Assistant Defender at the Office of the State Appellate Defender in Springfield, Illinois.