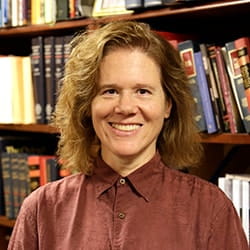 Professor Bernstein is a nationally recognized authority on tort law and feminist jurisprudence, as well as professional responsibility, products liability, and family law. Her awards include the first Fulbright scholarship in European Union affairs given to a law professor. As a member of the American Law Institute, she has served as an adviser on two torts Restatements, the recently completed one on intentional torts and the in-progress Restatement covering remedies. In 2020 she received from the AALS Section on Torts and Compensation Systems the top honor in her academic field, the William L. Prosser Award.
Her writings have appeared in dozens of law reviews, including the principal ones of Harvard, Yale, Columbia, California, Michigan, Cornell, Duke, Texas, and Vanderbilt. Her books address torts, products liability, and the law of marriage. Professor Bernstein’s wide-ranging interests extend to microfinance, diversity as a rationale for affirmative action, and comparative and international law. Her scholarship has been cited in decisional law by federal courts (both trial and appellate) and the supreme courts of Pennsylvania and Texas. She has also authored a series on legal malpractice in the New York Law Journal.
Prior to joining Brooklyn Law School, Professor Bernstein was the Sam Nunn Professor of Law at Emory University School of Law, the Wallace Stevens Professor of Law at New York Law School and Norman & Edna Freehling Scholar and Professor of Law at Chicago-Kent College of Law. She also served as a visiting professor at Michigan Law School, Cornell Law School, and the University of Iowa College of Law, where she was the Mason Ladd Distinguished Visiting Professor of Law. Before her academic career, she practiced with Debevoise & Plimpton and was a law clerk to Judge Jack Weinstein of the U.S. District Court for the Eastern District of New York.
Publications