During opening remarks, Dean Nick Allard spoke about the power of law to improve and change the world. He pointed out recent work done by Law School students and graduates on everything from the exoneration of a wrongfully convicted man to preparation of asylum-seekers for immigration interviews.

“Our students and graduates continue to make us proud every day,” he said. “The impact our school has had, and continues to have, makes us a very singular institution.”

The honorees were introduced by Valerie Fitch ’88, the outgoing president of the Alumni Association.

Gladstone spoke of the influence the Law School has had on his long career, both during his tenure as co-CEO at Ernst & Young and his post-retirement work in the world of baseball.

“Being knowledgeable in various areas of the law is a great foundation for many business challenges you face after graduation,” he said. “My plans to practice law gradually changed as my career progressed, but what I learned at Brooklyn Law School and the discipline it encouraged remained very important for my career growth and success throughout 40 years.”

Gladstone spent most of his career at Ernst & Young, except for a tour of duty with the U.S. Air Force during the Korean War. In 2015 he was crowned the “King of Baseball” by Minor League Baseball for his dedication and service to the sport, particularly through the Tri-City ValleyCats, the Class A affiliate of the Houston Astros.

Former New York Supreme Court Judge Emily Goodman ’68 introduced Karten, touting her perseverance in starting her career at a time when there were few women lawyers. Karten initially worked as a secretary for attorney Jacob Fuchsberg and worked on his successful campaign for the New York Court of Appeals. She then finished college and attended the Law School’s four-year night program while working for Fuchsberg in Albany two weeks each month. She went on to become a highly distinguished personal injury lawyer, representing the first U.S. health care worker to test positive for HIV/AIDS as a result of a needle stick, as well as the family of Ramadan Kurtaj, a construction worker killed in an Upper East Side crane crash in 2008. In the latter case, Karten and Bernadette Panzella ’81 won more than $96 million in damages for their clients.

“We have only to look at the events of the last 10 days to see how our profession is leading the charge in regard to the challenges facing our country today,” Karten said. “We in this room have been trained by one of the best law schools in the country—let’s make a difference. That’s what we were taught at Brooklyn Law School.”

Rising Star del Castillo has spent more than 20 years in the media and entertainment industry. Prior to her position in the Mayor’s Office of Media and Entertainment, she was vice president of development and business affairs at American Documentary, overseeing all aspects of legal and business affairs, and led the development of Austin Studios during her tenure at the Austin Film Society. While accepting her Rising Star award, Del Castillo mentioned that her ability to be a “rising star” in the world of law was thanks to the Law School’s four-year night program, which she attended while continuing to work and raise her young son.

“Thanks to Brooklyn Law School, I now have the esteemed privilege of serving my beloved city of New York and supporting the growth of an industry in which I’ve invested over half my life’s work,” she said. “I’m deeply honored to receive a rising star award. It is a recognition that we are indeed in constant motion with opportunities to grow at every turn, and to rise at any moment.”

Lorshbough has spent more than a decade as a volunteer and political activist for LGBTQ civil rights. Prior to becoming legislative counsel at the NYCLU, she worked as a litigation fellow with Lambda Legal, presided over landlord-tenant conciliation in New York City Housing Court, fought to combat discrimination and due process violations through Legal Services-NYC, and created the Law School’s first economic justice pro bono project. She thanked the Law School faculty and her fellow alumni for the Rising Star recognition, saying she “stood on the shoulders of giants at each step.” She also pointed to Law School alumni involvement in the legal response to the president’s immigration executive order as a point of pride.

“Since last Saturday, I’ve seen so many members of our community stand up over and over again to say, ‘I will take action.’ Our folks just keep standing up,” she said. “Last week I was proud to be a Brooklyn Law School alumna, but today I am even prouder.” 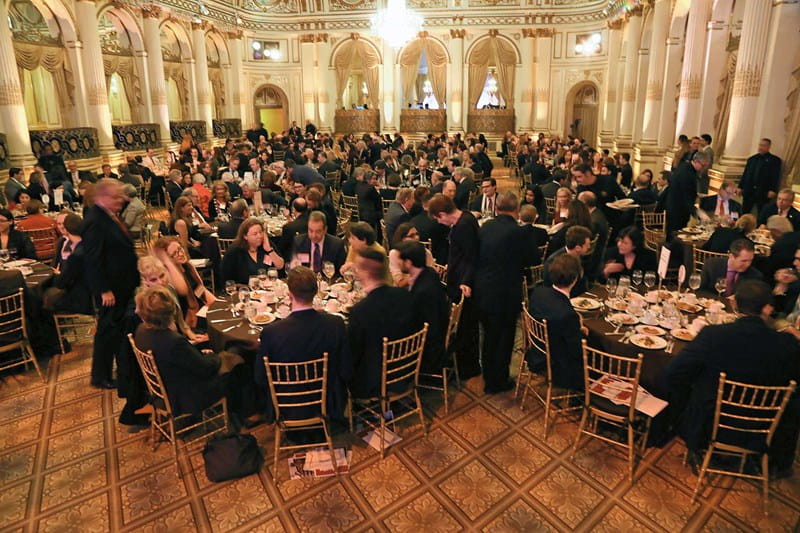