The Law School hosts a full-day program on Constitution Day. 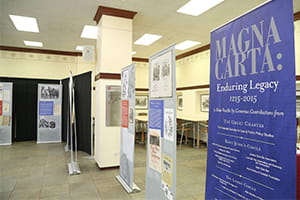 The Law School marked Constitution Day on Sept. 17 with a full-day symposium devoted to the 800th anniversary of the Magna Carta, “From Runnymede to Philadelphia to Cyberspace: The Enduring Legacy of Magna Carta.” The program included presentations and discussions with an international roster of renowned authors, historians, artists, librarians, archivists, and scholars, including several faculty members from the Law School.

The event was held in conjunction with the international traveling exhibit “Magna Carta: Enduring Legacy 1215–2015,” which the Law School hosted on campus and at Brooklyn Borough Hall Sept. 14–28. The exhibit was presented by the American Bar Association in partnership with the Library of Congress and its law library.

“Magna Carta, as it was repeatedly revised and interpreted over the centuries, was integral to the creation of the American system of laws and still informs our nation’s commitment to securing the rights and liberties of all,” said Dean Nick Allard. “Brooklyn is known as the ‘borough of immigrants’ and the ‘borough of churches,’ and has long been a gateway to the American Dream for people of all backgrounds. So it was particularly fitting to host this event here.”

Historian and former BBC journalist Derek Taylor, author of Magna Carta in 20 Places, began the day with a keynote. He discussed the history of Magna Carta and dispelled some of the popular myths about the document.

“It’s revered all over the world as the most hallowed and ancient beacon of justice and freedom from oppression, but if we take a closer look at the document that the English King John was forced to agree to by his barons in 1215, we soon discover that it actually did next to nothing for 85 percent of the population who remained agricultural slaves,” Taylor said.

The panel “Secrets of the Archives: Why We Preserve Documents in the Digital Age,” led by Professor Janet Sinder, director of the library at Brooklyn Law School, brought together librarians, archivists, and scholars from the United States and England to explore what can be learned from physical documents and the impact of digitization on research and preservation. Panelists included Professors Christopher Beauchamp and Christina Mulligan. The luncheon program “Are the Rule of Law and Constitutional Rights Compatible with Democracy?” featured remarks from Michael Pinto-Duschinsky, senior consultant on constitutional affairs to Policy Exchange, who spoke on the boundaries between judicial and legislative authority. Distinguished Visiting Professor of Law Andrew Napolitano and Professor Joe Gora provided commentary on the topic. 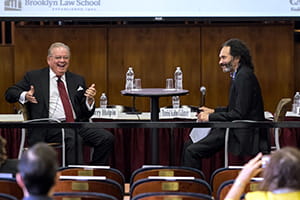 The afternoon kicked off with a conversation between Dean Allard and Hew Locke, the London-based sculptor and contemporary visual artist who created the piece The Jurors on permanent display at Runnymede. Locke explained how his work was not intended as a parade of heroes or a memorial, but a prompt for discussion on the often conflicting ideas of justice, which have constantly shifted throughout history and around the world.

The program considered the continuing impact of Magna Carta during the pane “Building a Magna Carta for the Digital Era—Collaborative Drafting of a Citizens’ Charter for Cyberspace,” moderated by Professor Jonathan Askin. Former FCC chairman Reed Hundt began the discussion, which included more than a half dozen notables from the world of Internet activism, law, and civil liberties. More than a thousand people watched the live stream of the panel. 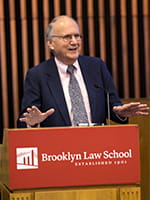 “The problem of Internet governance arose when the technology shifted, to everyone’s surprise, into the cable platform,” Hundt said, explaining that before the shift to cable, the Internet was more like a service that ran on top of existing telephone infrastructure, governed by the rules of telephony.

Renowned scholar A.E. Dick Howard, professor at the University of Virginia School of Law, brought the day to a close with his lecture “Magna Carta’s American Adventure.”

“At the core of Magna Carta’s legacy in the United States is the rule of law,” said Howard, “the idea that no one, including those in government, is above the law.”
He was introduced by Professor and Vice Dean William Araiza, and Professors Susan Herman and I. Bennett Capers provided expert commentary.