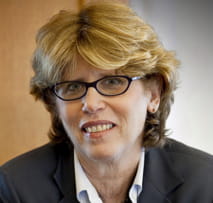 Liz Schneider is a nationally recognized expert in the fields of federal civil litigation; civil procedure; and gender, law, and domestic violence. She is a frequent commentator for print and broadcast media. She is the author of the prize-winning book, Battered Women and Feminist Lawmaking (Yale University Press, 2000), co-editor of Women and the Law Stories (Foundation Press, 2011, with Stephanie Wildman), and co-author of several other books. She has also written numerous articles and book chapters on civil rights, civil procedure, women’s rights, and domestic violence. She was the Founding Director of the Edward V. Sparer Public Interest Law Fellowship Program at Brooklyn Law School (1984 – 2019).
She has lectured around the world and participated in the training of lawyers and judges in countries such as China, Vietnam, and South Africa. Professor Schneider has also been a Visiting Professor at Harvard and Columbia Law Schools.
She is a member of the American Law Institute and has worked with the National Association of Women Judges. She has been honored by numerous organizations such as the National Organization of Women-NYC and the New York State Coalition Against Domestic Violence. She has been active in reform of legal education, serving as a member of the American Association of Law Schools Executive Committee and the Board of Governors of the Society of American Law Teachers.
Professor Schneider joined the faculty in 1983 after serving as a Staff Attorney with the Center for Constitutional Rights and a Staff Attorney with the Rutgers Law School-Newark Constitutional Litigation Clinic. She clerked for the late U.S. District Judge Constance Baker Motley of the Southern District of New York. She earned a J.D. from New York University School of Law where she was an Arthur Garfield Hays Civil Liberties Fellow, an M.Sc. in Political Sociology as a Leverhulme Fellow at the London School of Economics, and a B.A. from Bryn Mawr College, cum laude with Honors in Political Science.
Publications