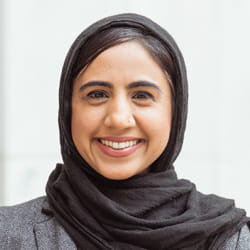 Professor Sayed’s scholarship focuses on how immigration law intersects with other areas, including criminal and national security law, and explores the ways in which the law can protect the rights of vulnerable immigrant populations, while still achieving other desired immigration policy outcomes. Her most recent article, “Terrorism and the Inherent Right to Self-Defense in Immigration Law,” was published in the California Law Review.

Professor Sayed began her academic career as a Clinical Teaching Fellow and Supervising Attorney at the Center for Applied Legal Studies at Georgetown University Law Center, where she supervised and taught law students representing asylum seekers. Prior to her academic career, Professor Sayed represented immigrants in a variety of immigration matters as a staff attorney at the New York Legal Assistance Group, an Immigrant Justice Corps Fellow at Sanctuary for Families, and a Kirkland & Ellis New York City Public Service Fellow at Her Justice. Professor Sayed also served as a Refugee Officer for the U.S. Citizenship and Immigration Services and as law clerk for the Hon. Kimba M. Wood on the U.S. District Court for the Southern District of New York.