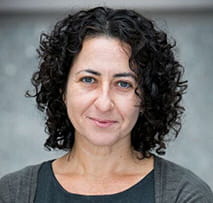 Professor Kate Mogulescu directs the Criminal Defense & Advocacy Clinic, which she launched in 2017 when she joined the Brooklyn Law School faculty. Her work and scholarship focus largely on gender, sentencing and reentry issues in the criminal legal system, with a focus on gender-based violence, intimate partner abuse, sex work and human trafficking. Through the Survivors Justice Project, a grant-funded interdisciplinary collective, the Clinic works with people whose experience with abuse and violence led to their own criminalization and incarceration.

Before starting the Clinic, Professor Mogulescu worked as a public defender at The Legal Aid Society for 14 years. In 2011, she created the Exploitation Intervention Project to specifically represent both sex workers and victims of exploitation facing prosecution. She also founded and continues to lead the Survivor Reentry Project, a national training and technical assistance initiative on post-conviction advocacy for survivors of trafficking, and the Human Trafficking Clemency Initiative.

Professor Mogulescu offers critical analysis of carceral approaches to violence and harm. She has served as a speaker and specialist on human trafficking for the U.S. Embassy Public Affairs Section in India, and has also testified before the New York City Council, the New York State Legislature, and the United Nations Human Rights Committee. She regularly trains public defenders, prosecutors, and other members of the legal community and advocates extensively against the criminalization of vulnerable and exploited people. She is a member of the Freedom Network and on the steering committee of the New York Anti-Trafficking Network. Her scholarship has been published in numerous journals and law reviews including the University of Miami Law Review Caveat, the Florida Law Review, the CUNY Law Review, and the Anti-Trafficking Review. She has also been widely featured in popular media, including an op-ed in The New York Times in 2014 titled “The Super Bowl and Sex Trafficking,” and she has been profiled in The Guardian and The Village Voice.