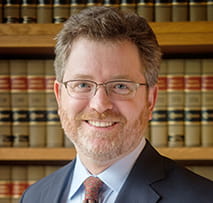 Professor Kolber writes and teaches in the areas of health law, bioethics, criminal law, and neurolaw and is affiliated with the Law School’s Center for Health, Science, and Public Policy and the Center for Law, Language & Cognition. In 2005, he created the Neuroethics & Law Blog and, in 2006, taught the first law school course devoted to law and neuroscience. He has also taught law and neuroscience topics to federal and state judges as part of a MacArthur Foundation grant. Professor Kolber has been a visiting fellow at Princeton University's Center for Human Values and at NYU Law School's Center for Research in Crime and Justice. His work has been frequently discussed in the media, including the New York Times, Wall Street Journal, and USA Today.

Professor Kolber began his academic career on the faculty of the University of San Diego School of Law. Before that, he clerked for the Honorable Chester J. Straub of the U.S. Court of Appeals for the Second Circuit and practiced law with Davis Polk & Wardwell in New York. Professor Kolber received his A.B. from Princeton University and graduated Order of the Coif from Stanford Law School, where he was an associate editor of the Stanford Law Review. Prior to law school, he was a business ethics consultant at PricewaterhouseCoopers.