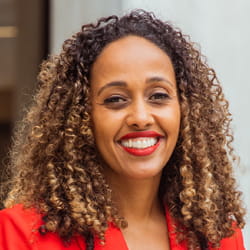 Alexis Hoag-Fordjour teaches and writes in criminal law and procedure, evidence, and abolition, and co-directs the Center for Criminal Justice. Her scholarship interrogates the policies, doctrines, and practices within the criminal legal system that erode people’s constitutional rights and perpetuate racial subordination. Professor Hoag-Fordjour's writing has appeared in the New York University Law Review, Michigan Law Review, Harvard Law Review Blog, and other journals. She serves on the boards of the Death Penalty Information Center and the Eighth Amendment Project, and on the editorial board of the Amicus Journal, and co-chairs the Capital Punishment Committee of the New York City Bar Association. A legal contributor for CBSNews, Professor Hoag-Fordjour frequently provides on-air and in-print analysis for MSNBC, NPR, CNN, and other media outlets. In 2021, she was elected to membership in the American Law Institute.

Prior to joining the Law School, Professor Hoag-Fordjour served as the inaugural practitioner-in-residence at the Eric H. Holder Jr. Initiative for Civil & Political Rights at Columbia University, and as a lecturer at Columbia Law School. She spent more than a decade as a civil rights and criminal defense lawyer, primarily representing capitally convicted clients in federal post-conviction proceedings, with the NAACP Legal Defense and Educational Fund, Inc. and the Office of the Federal Public Defender in Nashville, Tennessee. Professor Hoag-Fordjour graduated from Yale University and NYU School of Law, where she was a Derrick Bell Public Interest Scholar. She served as a law clerk for the late Judge John T. Nixon of the United States District Court for the Middle District of Tennessee.