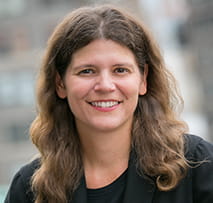 Professor Gilchrist joined the faculty in fall 2015. She teaches the Social Justice Gateway of Legal Writing, and National Security Law.

Professor Gilchrist's scholarship focuses on national security law issues and the intersection of national security with civil rights and human rights law. In addition to law review articles, her commentary has been published in The Washington Post, Miami Herald, Just Security, and Jurist, among others.

Previously, she served in the federal government as an analyst at the CIA and subsequently as a liaison to the FBI’s Joint Terrorism Task Force in New York City. She practiced law at Cleary Gottlieb Steen & Hamilton in New York, where she focused on securities law and international law. She clerked in the S.D.N.Y. for the Honorable Robert P. Patterson.

Professor Gilchrist received her B.A. from Yale University and her J.D. from Columbia Law School, where she was a Kent Scholar and an Articles/Submissions Editor at the Journal of Transnational Law. After graduating from Yale, she was awarded a Fulbright scholarship to study Arabic literature and Islamic law in Damascus, Syria. She is proficient in Arabic, Italian, and French.