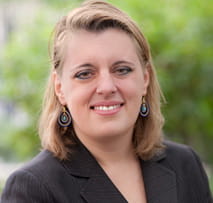 Miriam Baer is a Professor of Law at Brooklyn Law School, and a Senior Fellow in the Carol and Lawrence Zicklin Center for Business Ethics Research at the Wharton School.

Baer writes and teaches in the areas of corporate and white-collar crime, and criminal law and procedure. In 2016, Professor Baer was elected a member of the American Law Institute, where she serves as an Adviser on the ALI’s Principles of the Law of Compliance, Enforcement and Risk Management.

Prior to entering academia, Professor Baer served as an assistant general counsel for compliance with Verizon, and was an Assistant U.S. Attorney in the Criminal Division of the U.S. Attorney’s Office for the Southern District of New York. She also practiced as a litigation associate with Cravath, Swaine & Moore and was a law clerk to Judge Jane Roth of the U.S. Court of Appeals for the Third Circuit.

Professor Baer’s scholarship focuses primarily on the federal government’s attempts to detect and punish corporate crime. Several of Baer’s pieces examine the ways in which the federal government’s enforcement policies impact individual incentives to violate the law; organizational incentives to detect and report such violations; and the ongoing relationship with government enforcers and organizational compliance personnel. Throughout her work, Baer raises the concern that society’s instincts to punish corporate crime may crowd out more salutary regulatory responses.

Employing much of what she has learned from studying organizational compliance, Baer’s work also examines wrongdoing among police and prosecutors, inquiring how certain structural interventions might improve police and prosecutors’ compliance with procedural and constitutional rules. Here too, Baer warns that punitive responses may be less effective (or less effective on their own) than devices that remove the opportunity for wrongdoing in the first place.

Baer’s most recent work turns to white collar crime’s substantive laws and reveals the ways in the federal criminal code’s failures to either fully define a crime (e.g., insider trading), or to statutorily grade it (e.g., fraud), collectively fuel competing narratives of overcriminalization and underenforcement, and undermine the criminal justice system’s legitimacy and effectiveness. The articles and essays described above have been published in numerous journals and book chapters, including in the Columbia Law Review, Virginia Law Review, Texas Law Review, and Michigan Law Review, and the Yale Law Journal Forum. Baer’s work has also been featured on the Columbia Blue Sky blog and NYU’s Compliance and Enforcement blog, and has been cited or quoted in the New York Times, Bloomberg Business, and other media.