Coronavirus Response Update
All classes will be remote for the remainder of the spring semester. On-campus events canceled through May 10. School facilities at 250 Joralemon St. and 111 Livingston St. closed until further notice. Read more.
Explore
Search
Follow Us

The Brooklyn Law School Moot Court Honor Society is excited to announce the Thirty-Fifth Annual Dean Jerome Prince Memorial Evidence Competition. Preliminary rounds will begin Thursday, March 26, 2020 and the Competition will conclude with the final round on Saturday, March 28, 2020. We’re pleased to announce that the Honorable Charles R. Breyer, Senior United States District Judge for the Northern District of California; the Honorable Kiyo A. Matsumoto, United States District Court Judge for the Eastern District of New York; and the Honorable Jenny Rivera, Associate Judge of the New York Court of Appels, will preside over the final round.

The 2020 Problem has been released. A link to the complete record is included below. Please submit all clarification requests to prince.competition@brooklaw.edu no later than Friday, January 3, 2020. Briefs must be submitted by Friday, February 7, 2020. Please consult the 2020 Competition Rules for submittal instructions.

This year’s Prince Competition problem, United States v. Stephanie Silver, focuses on three distinct, complex issues. In the problem, the United States charged Defendant Stephanie Silver with conspiracy to bomb a place of public use and attempt to bomb a place of public use, in violation of 18 U.S.C. § 2332f(a)(1) and (2). The charges stem from an incident in which a bomb partially detonated in the Boerum Municipal Fountain, located in the Joralemon Historical Village in Boerum City, Boerum. The bomb went off during the Boerum Street Fair. The Government alleged that Defendant and other members of the Anti-Consumerist Brigade (“ACB”) conspired to plant the bomb to protest the event’s purported promotion of consumerism. The ACB is an “anti-consumerist” organization, opposed, among other things, to the sale and consumption of material goods.

The District Court granted in its entirety a pretrial motion brought by Defendant and suppressed the following: (1) evidence from a flip-phone discarded by Defendant after she temporarily submitted to police authority but then subsequently fled; (2) footage obtained from a pole camera installed across from a residence where Defendant was living; and (3) statements made by Defendant during the booking process. The Government brought an interlocutory appeal in the United States Court of Appeals for the Fourteenth Circuit. The Court of Appeals affirmed the decisions of the District Court, holding that (1) the theory of continuous seizure should apply where a suspect temporarily submits to police authority but then subsequently flees; (2) the Fourth Amendment requires that law enforcement officers obtain a warrant before installing a pole camera to surveil a residence in a residential neighborhood; and (3) an objective test should be used to determine whether the routine booking question exception to the Miranda requirements applies to a law enforcement officer’s specific questions.

The case is now before the Supreme Court of the United States on three certified questions:
View Competition Briefs

Please join us in congratulating the 2019 Awardees:

The Dean Jerome Prince Memorial Evidence Competition is named in honor of the late Jerome Prince, renowned evidence scholar, teacher, and author of Prince on Evidence, who served as Dean of Brooklyn Law School from 1953 to 1971.

The competition is hosted in the spring by the Moot Court Honor Society on Brooklyn Law School's campus in the heart of Brooklyn Heights. The Competition provides law students from across the nation the opportunity to write and argue an appellate brief that addresses evidentiary issues in a contemporary context. 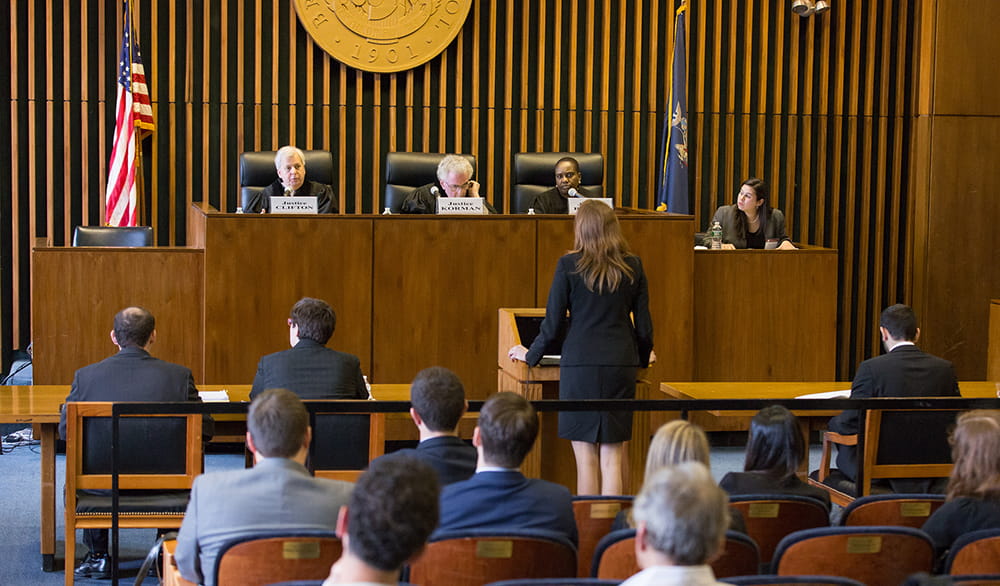 Congratulations to UC Hastings College of the Law who took first place overall and to Georgia State University College of Law who won the Best Brief award.

Congratulations to Ohio State University Moritz College of Law for earning first-place honors and to Southwestern School of Law who won the award for Best Brief.

Congratulations to the University of California-Hastings College of Law for taking first place!

Congratulations to the University of Georgia Law School for taking first place!