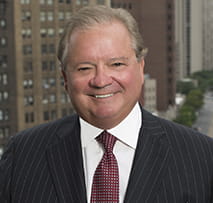 Nicholas W. Allard is Professor of Law Emeritus at Brooklyn Law School. He served as Dean from July 2012 to June 2018 and as President from July 2014 to June 2018. At the Law School, he taught courses on Government Advocacy, Privacy Law in a Digital World, and Introduction to Legal Process.

Professor Emeritus Allard also serves as Senior Counsel in the Public Policy and Regulation practice at Dentons, a global law firm with presence in more than 50 countries. Before joining the Law School in 2012, he was chair of the Public Policy Department and co-chair of the Government Advocacy Practice Group at Patton Boggs in Washington, D.C. His clients included domestic and international organizations that were startups, Fortune 500 companies, nonprofits, and public and private universities. Before joining Patton Boggs, he was a partner at Latham & Watkins, where he chaired the firm’s Government Relations Group.

He began his legal career after graduating from Oxford University (Rhodes Scholar) and Yale Law School. He was a law clerk in San Francisco and Washington, D.C., and worked on Capitol Hill for the late Senators Edward Kennedy and Daniel Patrick Moynihan. He is the recipient of multiple honors and awards for his work. These include the City & State 2017 “Brooklyn Influencers” list, a top ranking in “Government Relations” by Chambers USA from 2012 to 2015, a 2010 Visionary Award from the National Journal-Legal Times, recognition as one of D.C.’s “Top Lobbyists” by The Hill from 2008 to 2013, Super Lawyers list by The Washington Post, 2012 to 2015, and a Hermes Award for Contribution to Study of Communications from the Syracuse University College of Law. He has served on numerous academic boards, taught at several law schools, and published scholarly articles on a broad range of issues, including Internet law, new media, and privacy.

He received his J.D. from Yale Law School and holds a B.A. from Princeton University’s Woodrow Wilson School of Public and International Affairs. He is a Rhodes Scholar and holds an MA in Politics, Philosophy and Economics from Oxford University.